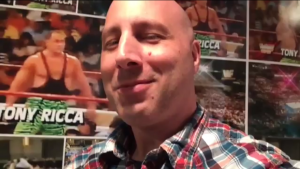 Tony Ricca can be found at the following Links:

Hammonton Food Trucks and The Pharaoh. What do they both have in common with each other? Both share the same anniversary date of their debut on June 12th. The Food Trucks were a spectacular showing of people at the event on June 12, 2015, 23 years after The Pharaoh had his debut on June 12, 1992 in Hammonton. Tom Ricca, aka Tony Ricca of WWE’s Superstars of Wrestling said “the Food Truck festival was such a success” and was happy to share the anniversary date of when he debuted as The Pharaoh in which landed him several opportunities in Professional Wrestling. http://www.hammontontv.com/news/

The Following link provides a brief part of Tom Ricca and his daughter Gabriella Ricca. https://www.youtube.com/watch?v=0bir6M4bgRE